Rise of the Rune Lords - Session 7

Questioned Tsuto but he's unresponsive. Odo ate half his foot and he still resisted.  Garrick even leaned on his stump with his staff and still couldn't get him to answer any questions.  Astra and the others think he might be under some sort of compulsion.  Father Xanthos is going to try and perform a blessing on him to remove any demonic taint but it will take time for him to prepare.  Time that we just don't have with 200 goblins about to descend on Sandpoint.  Garrick became quite agitated that no one seemed to be taking the threat seriously.

Spent 150gp on Wand of Cure Light Wounds.  Garrick will be the weilder of the heal stick and responsible for keeping the fighters fighting.

Ameiko - Remebers a line from a story: From the keeping Maltheshnakor the Barghest will come reaping.

Barghest is a Fiendish relative of Goblins.  Shapechangers: Wolf form and Humanoid form. Can feed once per month can devour non-evil humanoid corpse to grow. When it consumes enough it sheds it's skin and becomes a greater Barghest.

Get a voucher for 300gp from the Mayor to be used to purchase supplies.

Niska warned me to beware of the rickety bridge also the well and spawn of sin.

We hit the tunnnels the next morning.  We ran into a creatures in the first chamber.  Garrick thought he recognized it but it was only after we had dispatched it and he could examine it closer that he realized it was a Sin Spawn. Good old Niska! Her visions are always  They were common during the Thassalonian Empire and were a result of some of their rituals but Garrick can't remember much more than that.  We followed the tracks further on and discovered a statue of a beautiful woman made of red marble. Her hair is being held back by what looks like blades. She looks enraged and is holding an actual Ranseur and a book with a 7 pointed Star and symbols on the cover.  Ociram recalls that one of the symbols is called Sihedron rune. It represents one of the 7 sins from the Thassalonian Empire.  We're all beginning to think that the Thassalonians were a little sinister.

We followed the tracks into an area that was obviously an old prison.  There's a wooden rickety platform 10 feet above the floor.  Niska's warning said bridge, but she's not always precise.  It's not trapped but Sapphire does hear breathing beneath the platform.  Astra shot an arrow at the platform and two Sin Spawn walked out.

One of the Sin Spawn bit Odo and caused him to become sickened. The second attack knocked Odo unconcious! ACK!  Garrick moved quickly to poke him with the heal stick.  Then Astra went down and Garrick ran to her taking an AOO for 5 damage on the way.  THEN Sapphire went down and Garrick ran to her with the heal stick.  With Sapphire back up, her, Odo and Cadmus dealt with their Sin Spawn while Ociram and Astra took care of theirs.  Sapphire opened their Sin Spawn's throat after it was down and Astra did the same to be sure they both stayed dead.  It was a hard and close fight.  If Garrick is going to be the heal stick weilder, he needs to make sure he positions himself more strategically and he needs more movement. 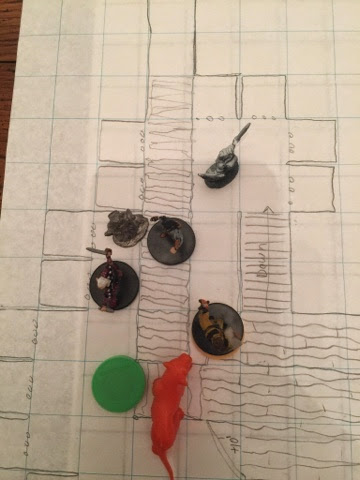 Rise of the RuneLords - Session 6

We entered a small room.  Odo tracks by scent but can't determine a fresh trail. He knocked over a shelf and got coated in purple dye. We found what at first appeared to be an empty safe but Sapphire spotted movement within and we were jumped by a Goblin.  Goblins started coming in from everywhere.  Odo helped dispatch two and Garrick expended the last of the scrolls of Cure Light Wounds.

Goblins were all dealt with.

Proceded to basement where Ociram was attacked by an oriental looking half-elf archer... Turned out to be Tsuto! I KNEW THAT GUY WAS BEHIND THIS!!!!

He's a monk/rogue/rangery dude.  Astra was almost killed but was saved.  We finally took him down.  His journal had drawings of a woman that I believe to be Father Tobyn's daughter, Nualia. Astra located Ameiko after a cursory search.

Tsuto had ambushed Ameiko and tried to get her to join him in some plan to raid Sandpoint.  She recognizes the drawings as Nualia, Father Tobyn's daughter. She is drawn as a succubus in the last drawing. 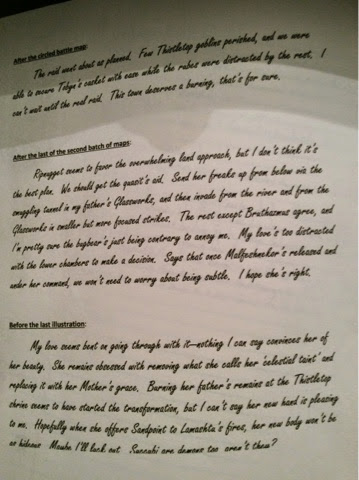 Rise of the Rune Lords - Session 5

Shaleiloo met us for lunch to deliver a more detailed report on the Goblin situation.
After we met with Shaleiloo, we went hunting with the Foxglove who we saved during the Goblin Raid.  He gave us each a horse. Garrick's is a palomino stallion named Susan.  We got the boar. Skinned and removed head per ritual to honor the boars spirit.

The next morning we learned that Ameiko is missing. She left after getting a letter from Tsuto. 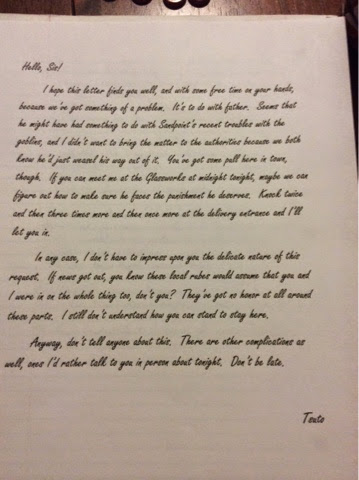 The letter indicated that he wanted to meet her at the Glass works. We headed there to investigate.  The doors were locked but Sapphire is awesome and picked them with ease.  The place is full of dead workers and Goblins throwing glass all over the place. We found a dead guy in a chair and he had been killed by pouring molten glass over him.  He looked very well protected.  Too bad he was too dead to appreciate it. We dispatched 7 Goblins.  The last one tried to run out yelling "Tsuto! Tsuto!"  Odo dispatched him with extreme predjudice and then batted his head around for a while.  He still has a lot of Kitten in him.

Rise of the Runelords - Session 4

Garrick's lucky day!  As the group was finishing up breakfast at the Rusty Dragon, a salty looking sailor came in to tack up a sign on the Help Wanted board.  Apparently, they had an accident loading a crate of copmy's and now there's 10 or so of the 3 foot long poisonous dinosaurs running loose in town.  Garrick, naturally jumped at the chance to interact with them.  And to top it all off, our reward will be a Deinonychus! What luck! Garrick had been planning a long trip to visit the Mammoth Lords since that was dinosaur country but now he's had a new companion dropped right into his lap.

Not long after we conclude the deal with the Sailor, a woman came running into the Tavern claiming that a goblins were in her house. The group rushed to her aid to find her husband badly injured.  Astra lays hands and the man regains consciousness.

We easily dispatched the Goblin but were able to revive him for questioning.  He'd been holed up in the house for days since the last Goblin Raid.  Sapphire and Garrick investigated the crawlspace to be sure there wasn't any more goblins hiding there.  Sapphire spotted a compy on the other side of the house and the hunt was on!

The next morning, after deploying a series of cleverly engineered traps, the group managed to capture all of the missing compy's without incident.  Garrick returned them to Ma'Lady at the docks and received his reward of a Deinonychus named Sue.  Garrick decided that just won't do and names her Kira.

Shaleiloo, an Elf Rogue and town scout has finally returned from her scout of the surrounding forests and agreed to meet with us for lunch at the Rusty Dragon to give her report.
The Sheriff has left for Magnamar to recruit more guards.

Rise of the Runelords - Session 3

The next morning, Cadmus and Ociram left to explore the town on their own after the sheriff asked us not to stray too far from town.

Garrick and Sapphire discovered help wanted signs on the message board at the Rusty Dragon and decided to check out two of the jobs.  The first was a need for animal skins posted by the local tanner and the second was for day labor for the street sanitation crews.  Sapphire believed the latter might be a good way to eavesdrop and gather rumors about the town.

In order to honor the animals that Garrick takes for skins to sell to the Tanner, he visited several taverns to arrange deals for their kitchens to use the meat.

At the meat market, Garrick and Sapphire met a human male named Chod Bevuk. He claims to have lost a finger in a fight with Chopper, however, Garrick believed he sensed some deception on Chod's part regarding how he lost the finger. Chod had fought the chapel fire and he said it was a very fierce fire. He thought Father Tobyn was a good guy. Tobyn was a priest of Desna. Father Xanthos was an acolyte of Father Tobyn. Father Tobyn had a very beautiful daughter who had celestial blood. She disappeared after the fire. She was believed to a been completely consumed by the fire.  Garrick asked about how Father Tobyn was found after the fire.  Based on Garrick's knowledge of healing, the position that Tobyn's body was found in was more consistent with him being dead before the fire was set.

Lonjiku Kaijitsu's wife committed suicide shortly after Chopper was caught and the chapel burned. Ameiko and her half-brother Tsuto had a fight after their mother died. Both parents are human, however Ameiko's brother is a half elf. After his mother died, his father sent him to the orphanage. Garrick thinks that Tsuto might be the pointy-eared "Longshanks" that hired the Goblins to raid the town last night.  He had means, motive, and opportunity.  Motive being how he was spurned after his mother's death.

Garrick and Sapphire also ran across Cyrdak Brokkus. He offered us free tickets to the play and is wanting to write a ballad about the goblin battle. While we were talking a human male named Jasper arrived. Something passed between them that was like affection. They entered the theater together and Sapphire snuck in after them. Jasper is apparently romantically and secretly involved with Cyrdak.

The theater holds approximately 250 guests. Garrick and Sapphire also met Alashandra of Magnamar. She hopes to play Sapphire in the play Cyrdak is writing.

We were finally able to talk to the Tanner, Ravanky. He is a human male and is interested in rabbit, mink, Wolf, wild boar, and deer pelts.

Garrick purchased two scrolls of cure light wounds and then we went to visit Gorvi. Sapphire and Garrick spent the day working in the streets picking up trash and listening for rumors.
Posted by Unknown at 11:22 PM